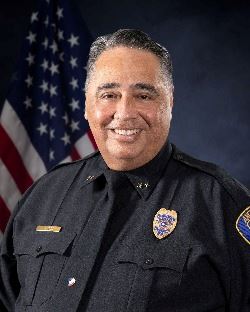 I attended the Brazosport College Police Academy. I began my 38-year career in law enforcement at the Brazoria County Sheriff’s Office in 1983 as a Jailer and soon thereafter began to work street as a Patrol Deputy. I was then promoted to Patrol Sergeant. In 1995, I accepted a position at the Lake Jackson Police Department as a Patrol Officer and worked there until 2006, after having attained the rank of Patrol Sergeant. In September of 2006, I accepted a position at the Angleton Police Department as a patrol officer and have worked my way through the ranks of Corporal, Sergeant, and Lieutenant, In January of 2021, I was promoted to Assistant Chief.

I am a Lifelong learner and open-minded to new ideas and better ways of accomplishing goals. If I ever became unwilling to learn, then I will know it is time for me to move on. In 2000, I completed the prestigious and renowned Leadership Command College (LCC), a course of study offered through the Bill Blackwood Law Enforcement Management Institute at Sam Houston State University. This is a nine-week program that spans over two years and helps prepare law enforcement leaders with the leadership and management skills necessary to be successful in their role. This program consists of three modules held at Texas A&M University, Sam Houston State University, and Texas Woman’s University.

While I do have a progressive leadership style, I believe it is important to remember our roots and hold fast to the values of excellence. I am excited at the opportunity to prepare the Angleton Police Department for the growth that is coming with our city, while remembering the roots of what makes our community great. I believe in fostering genuine relationships with our citizens, and that is something I have tried to do my entire career. It is something I want to instill in new and veteran officer alike and lead our agency to becoming more engaged in the community than it ever has been. These relationships are important to our success and even more important to our citizens. I want each officer to shine as individuals because it is about them and the integrity of this agency and not about myself.